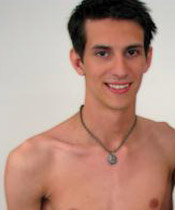 In his own words:

"Guess who is having more fun?"

"Mike is tall smoth lean and has a really nice big dick. Anthony his older cousin."

"Big dicks must run in the family."